Here's another fall/winter favorite. I came up with this recipe sometime last year when I was thinking about cranberry crunch and I decided it would be great to turn it into a chicken recipe (well, maybe minus the crunch).

This is a fairly easy recipe which packs HUGE amounts of flavor. There's something special about the combination of brown sugar, apples, cinnamon and cranberries. It's very important to make sure you get the cranberry sauce with whole cranberries - that give the necessary texture, to the final sauce; plus, it's already sweetened so you don't need to add anything extra to it.

Also, there are two ways you could go about caramelizing the apples: you can use white sugar and melt it, creating caramel, and then toss in the apples; or you can use brown sugar, which seems to dissolve a lot more readily (probably because it's got the moisture of molasses built-in) and then toss the apples in that. The first time I made this recipe I used white sugar, but this last time I was in a rush so I used brown.

The difference is the time and care that the caramelization takes with white sugar (it does take quite a few minutes for it to melt...using the oil was my shortcut to make this happen slightly quicker since oil is a good conductor), and the fact that you need to be careful to stop the cooking before it burns (accomplished by adding the apples to drop the temperature of the skillet). With the brown sugar, it seems you just don't need to wait as long and it doesn't seem to be as finicky a process. The end result though, in my opinion, is that the white sugar method tastes a lot richer and sweeter than the brown, but the brown works just as well if you're short on time. 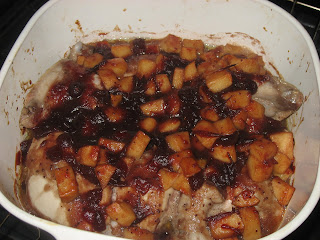 Is it chicken? Is it dessert? I don't know but it's very addicting.