Reading through the latest issue of Cooks Illustrated, a recipe called "Wild Rice and Mushroom Soup" caught my eye. It looks hearty, healthy, and perfect for winter. However, I knew I'd have to do quite a bit of tweaking to make it kosher because it uses chicken stock and heavy cream.

I decided to use the chicken stock because it seemed that the meaty flavor would be too good to pass up with the wild rice and mushrooms. I also further highlighted this aspect by incorporating many vegetables that boosted the umami flavor, such as carrots, sweet potatoes, and sun-dried tomatoes.

Instead of the cream, I used vanilla almond milk because I liked the idea of having a sweet nuttiness in the soup. I also added a lot more vegetables because I love a very chunky soup and they add nice color and flavor. I also made a bunch of other tweaks, changes, and adjustments just based on my own preferences and what I had on-hand.

So in fact, I would bet this soup tastes quite different than the original, but it was delicious all the same. There are some great tricks in here from the original recipe, including the use of baking soda to speed up the cooking time of the rice and cornstarch to thicken the soup.

This soup is unctuous and has a sweet and earthy flavor with an almost velvety texture. It has a nice blend of creamy thickness and chunky heartiness. It's perfect on a chilly or rainy day. 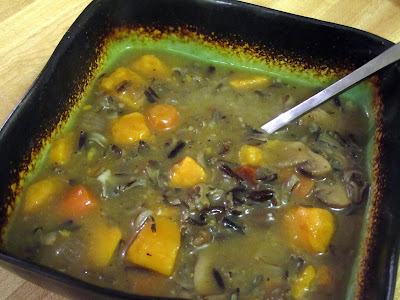 This year for Chanukah, Faigy got me a book I've been eyeing for a while: The Flavor Bible. It's great because it's not a cookbook, but rather a guide to creating dishes by pairing flavors that have affinities for each other. Most of the book is just long lists of every single kind of ingredient and a bit about its character and what it goes well with.

So of course I began leafing through the "A" section and hit one of the best parts of it: Avocado. Avocado to me is a little bit of a magical superfruit (as indicated in Faigy's Spaghetti Squash with Avocado Garlic Sauce recipe) because it just makes whatever it's in instantly more appealing (aside from its many health benefits). It's got a creaminess and fruitiness which, when complemented with a bit of salt, is heavenly all on its own.

There was one particular pairing that caught my attention: avocado + basil + tomato + red onion + balsamic vinegar. I've known about the first four for a long time (in panini or guacamole for example) but the last bit, the balsamic vinegar, intrigued me. Normally I am not a huge fan of balsamic vinegar raw, because it's a little too pungent for my tastes. But I wondered if I could take inspiration from this and make a delicious and quick brunch the next morning.

As it turned out, we had left over challah from Shabbat. No fresh tomatoes, red onion or basil though; we did have sun-dried tomatoes and dried basil however, which would suffice. I also thought I would use sea salt rather than my standard of kosher salt to get a little more flavor contrast with the avocado. Taking a little bit of inspiration from a co-worker who prepared an avocado open-faced sandwich for breakfast once for me, I decided to top some toast with eggs. It turned out to be incredibly filling and was less than 15 minutes from start to finish (I'll note the order of preparation in the recipe that I found to be fastest).