I'm a much bigger fan of eating more meat substitutes during the week than Ari is, so I've been trying to find ways to make them tastier. Though I'm not a vegetarian, I do believe that it is better for us and for the treatment of animals to eat meat less often. Therefore, I've been looking for ways to incorporate  tofu, tempeh, seitan, and more into our food in ways that taste good and is still healthy for us

One of the healthy and protein-filled options, tempeh, has been particularly challenging to get right, but I believe I finally did it with this recipe. Tempeh is made from fermented soybeans and can be particularly tough in texture. The trick is to steam it first so that other flavors can permeate it, turning it from a tough and flavorless substance into a hearty and delicious dish. Then, the tempeh marinates so that it fully absorbs the flavor, followed by quickly pan-frying to make it crispy on the outside.

As Ari is a meat lover, I also wanted to incorporate some of the flavors typically found in meat rubs and marinades to imitate some of that meaty, savory flavor. I had some red wine leftover from the weekend, which was still ok to drink, but not as great as it had been before, so I decided I had to use it here. Turns out this is a great recipe to use up some red wine you have on hand that is going but is not quite gone yet. Then, using this sauce recipe for inspiration, I composed an easy marinade that would compliment the heartiness of the tempeh well.

It came out really delicious - savory and sweet, soft with a bit of crispiness. After tasting it, Ari declared that using this recipe will actually make him crave tempeh for dinner! Knowing my husband, that is quite an endorsement. 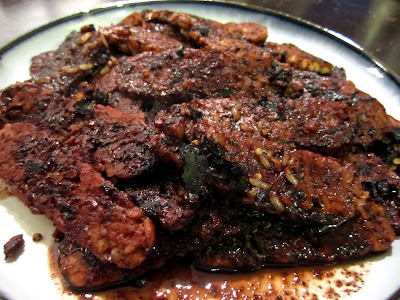