Pareve Vanilla or Blueberry Pudding (with Sugar-Free and Diabetic variants)

Okay. Here it comes. So I have this set of 4 recipes that kind of all belong grouped together and I've been meaning to post them for a while but haven't had time. Now I finally have the chance, so get excited!

So, the first recipe was for vanilla pudding. Let me give you some background on the genesis of this recipe first. I was going somewhere for Shabbat and I wanted to bring a dessert. The problem was, one of the people there was diabetic, so I couldn't bring anything with sugar. Another person was allergic to artificial sweeteners - so using splenda or such was out. So, I had to sweeten everything with honey (apparently some diabetics can have honey? who knew?). That's what led to the diabetic-friendly version of this recipe.

I later made this recipe again a few weeks later, but did not have the artificial sweeteners constraint, so I chose to use splenda since I wanted to minimize the sugar content anyway for calorific reasons. That's when the blueberry variation came about - I had a box of frozen blueberries I had been saving for a tasty dessert, and this seemed like the time to use it.

One big difference though was (kinda obviously) the flavor profile - the honey-sweetened one had a much more rich, full, even a little cloying (but not bad) taste than the splenda version. I kind of preferred it to the version with artificial sweetener.

I should note that these are actually just variations on the basic Joy of Cooking recipe for cornstarch pudding. I was surprised how easy it was - it's basically just a really simple custard. I hope that people will start realizing how simple it is to make a good pareve pudding and bring it more often to Shabbat meals! You can, of course, swap out the soymilk for regular milk for a dairy version. 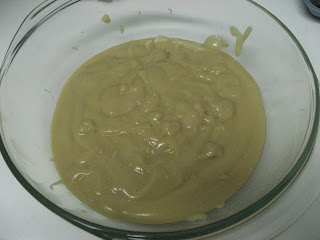 Basic pareve vanilla pudding - can be made sugar-free or diabetic-friendly!

1. Combine sugar, cornstarch, salt in a pot or saucepan.

2. Gradually mix in 1/4 cup soymilk into pot, whisking well so the mixture becomes a slurry (this will avoid lumps of cornstarch).

4. Turn on heat to medium and heat through until mixture comes to a simmer.

5. Extract about 1/2 cup of the mixture from the pot. Gradually stir this into the egg slowly, so you temper the egg (you want to raise the temperature of the egg without curdling it by sudden application of heat).

6. When egg mixture is sufficiently tempered, pour it back into the pot and bring to a boil. Cook for 1 minute beyond the boil.

7. Remove from heat. Stir in vanilla.

8. Pour pudding into a glass bowl, serving cups or ramekins and cover with plastic wrap, pressing it directly touching the surface (actually, I'm not sure this is 100% necessary since this is meant to avoid forming the 'skin' on top, but that's formed by the casein proteins in regular milk, which aren't present in soymilk). Chill for at least 1-2 hours before serving. 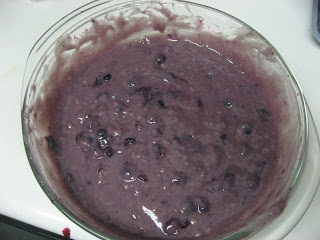 Combine 1 pint fresh or frozen blueberries with 1 tsp. lemon juice in a pot, along with a little bit of sugar/splenda/honey (maybe 1 tbsp - that's like 2 splenda packets I think) and a splash of water.

Cook over medium heat until blueberries are mostly dissolved (some can be intact - it adds texture to the pudding).

Mix blueberries with pudding well and chill as directed. 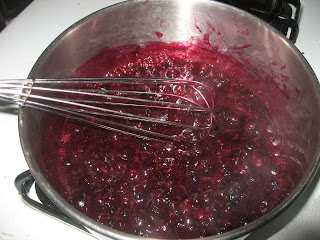 Cook the blueberries till they are about this texture

Replace 1/4 cup sugar with 10 packets splenda. Follow directions as above.