Faigy and I just got back from our two week trip to Southeast Asia. And in honor of that we've decided to bring you...the furthest thing from Asian cuisine we could think of! Well, not really. But I did make this for breakfast to give us a taste of being back home.

Because of the 12-hour time difference, we are extremely jetlagged, to the point that we were up and about at 4am. Faigy managed to get back to sleep but I was up for quite a while more, so I decided I would surprise her with breakfast in bed. The problem with that, I realized, is that before leaving we had completely emptied our fridge. This left us with no eggs, which are quite a staple of breakfast foods. I was originally thinking of making an omelette or pancakes but that obviously wasn't possible. So I did a quick search to get some ideas for egg-less breakfast ideas.

The first thing that I saw was oatmeal, which we had. I went to grab it from above our fridge and saw behind it that we also had a container of quick-cooking grits, which also doesn't require eggs. My first inclination was to make a sweet version with some jams we had in the fridge, but a recipe on the side of the box gave me the idea to do a more savory version.

I applied a few technique tricks to amp up the flavor of the grits (since they can tend to be bland) including browning the butter and toasting the grits; these steps can be skipped if you're in a hurry though. The box calls for water for cooking the grits but I used milk (yes, it was still good after 3 weeks! Ah, the joys of ultra-pasteurization) for added creaminess, and some garlic and paprika for enhanced flavor and color. I topped the cooked grits with additional cheese and wheat germ (we had some in the fridge; if you don't, it's not a big deal) and broiled it.

Since I took the savory route, I complemented it with some jam on toast to fill in the sweetness. Here's what it looked like (on our new serving tray from Vietnam).

I made this recipe to be enough for just the two of us but it can easily be expanded for four. 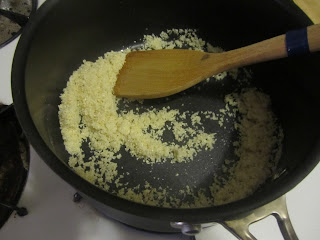 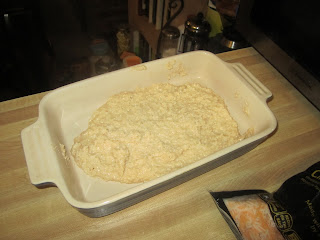 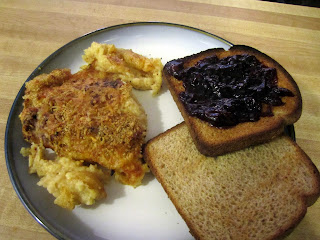